How can you help the people of Syria? 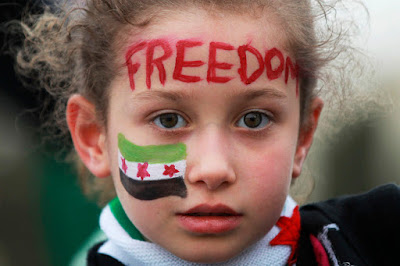 Many friends and activists are asking me how they can help the people of Syria and help end the bloodshed in Syria?

Certainly your prayers are helpful, but not enough. Actions are also needed.
Certainly, with millions of refugees and displaced Syrians, humanitarian assistance is greatly needed, but also not enough and serves only as a short term solution, a band-aid to a serious tragedy. We must not allow ourselves to merely play the role of an ambulance crew or a food bank while the root cause of that tragedy goes unchallenged and ignored.

You can help in a long term and real strategic way by supporting advocacy work for a free Syria. Help raise awareness about the struggle for freedom and democracy in Syria in a way that informs and mobilizes the public opinion. Only when the public cares about the injustice and genocide in Syria that our elected officials and government would start taking action to support the Syrian people's rightful struggle for freedom and justice. Until we do that, we will find ourselves spending hundreds of millions of dollars on medical and humanitarian relief with no end in sight. Sadly, we might run out of money before Assad, Iran, or Russia run out of missiles, barrel bombs, chemical weapons, or bullets to murder Syrians.

I urge you to support the Syrian American Council's effort to engage US media, fellow Americans, elected officials, and activists to help advance freedom, justice, democracy, and human rights for all in Syria.

Support SAC-LA through a one time or a monthly donation. Your support can make a big difference. I personally vouch for their great work.

SAC is the largest Syrian American advocacy organization supporting democracy, freedom, and human rights in Syria. SAC is a 501 (c)(3) nonprofit organization. Donations to SAC are tax-deductible.
Posted by Hussam Ayloush at 10:37 AM No comments:

THE INTERVIEW on France 24: An American Muslim perspective on countering violent extremism

Video: CAIR-LA Director Says Free Speech is the Answer to New Charlie He...

Posted by Hussam Ayloush at 7:30 PM No comments:

My comment on ISIS' latest barbarism: the burning of the Jordanian pilot to death


ISIS violated Islam’s teachings in more ways than one when it burned the Jordanian pilot to death. Based on the Qur’an, the Hadith (the sayings of the Prophet Muhammad), and the consensus of past and present day scholars, it is indisputably forbidden to burn, torture, or mutilate human beings or their bodies, even during wartime. Prophet Muhammad is quoted as saying that immolating is forbidden and that God alone has the authority to punish by fire in the afterlife.

Additionally, assuming that ISIS considered the Jordanian pilot to be a prisoner of war, Islam has very strict rules against even mistreating prisoners of war, let alone killing them. Islam mandates that even convicted murderers or rapists who are sentenced to death must be protected from abuse and from cruel methods of execution.

Most importantly, this is not the only instance that clearly shows that ISIS has a complete disregard for Islam’s teachings and for human life. ISIS has proven without any doubt that it is not an Islamic organization. It is a murderous terrorist cult who ideology and actions are so contradictory to Islam that it should not be even viewed through the prism of Islam. Muslims around the world have strongly rejected and condemned ISIS's barbaric actions. 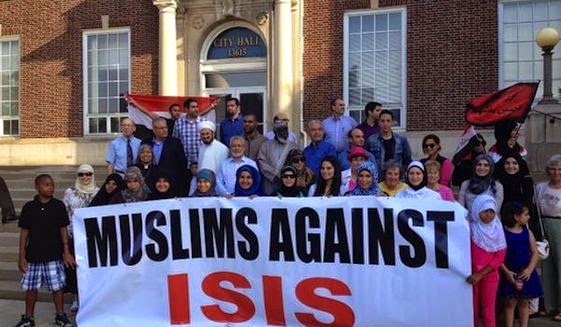 Posted by Hussam Ayloush at 12:33 PM No comments:

Workers’ Rights In Islam: A Cornerstone of Social Justice


Workers’ Rights In Islam:
A Cornerstone of Social Justice

“O you who believe! Be steadfast witnesses for God in equity…Deal justly, that is nearer to your duty” (Qur'an 5:8).

Some may not think of the theme of labor rights as being of central relevance to religious or specifically Islamic, teachings. However, it is an issue that affects each one of us, and our deen/faith offers clear guidance regarding the rights and responsibilities of the worker and employer to each other. If we work for our living, whether as an employee or an employer, we spend a great deal of our time at our work, and it is our duty to understand and uphold the rights of workers.

Labor rights are directly connected to Islam; social justice is a central Islamic theme. The guidance toward social justice in Islam is intended to promote and maintain social order, harmony, balance and general welfare. It is a comprehensive system that balances personal needs with the general good, so that one complements the other. Islam is both a religion and a comprehensive way of life and exemplifies justice for its practitioners. It is a formula that will satisfy anyone’s moral and spiritual needs as well as natural aspirations. Islam instructs people on how to live in harmony and peace with others, regardless of socio-economic status, race, gender or faith.

The Islamic concept of justice is based on equality and human dignity. God has enjoined justice and righteousness for all humans in all matters including but not limited to family matters, workers’ issues, trade and all relationships.

Mercy and Compassion
As in all matters, we are reminded that all human beings are created equal. If one of us is given a position of authority (such as an employer) over another, we have an obligation to treat our fellow creatures with compassion and fairness.

Prophet Muhammad, peace and blessings of God be upon him, said, “Your servants/workers are your brothers whom God the most High has placed under your authority. Therefore, a person who has a brother under his authority, should feed him out of that which he eats himself and should dress him with the same kind of clothes which he wears himself; he should not assign work to him which is beyond his capacity, and if you do so, then help him in his work” (Bukhari collection).

Prophet Muhammad, peace and blessings of God be upon him, said, “When your cook or servant brings your meal to you, if you do not invite him to sit with you and eat, at least give him some of the meal to take. After all, it was he who prepared it.” (Bukhari Collection)

Prophet Muhammad, peace and blessings of God be upon him, also said, “Those who have mercy on others will receive the mercy from the Most Compassionate, Allah.  Be merciful to those in the Earth, then the One in the Heaven, Allah, will be merciful to you”

”And O my people! Give just measure and weight, nor withhold from the people the things that are their due” (Qur'an 11:85).

The employer-worker relationship must be based on justice and mutual consent, honoring the dignity of the worker. To illustrate this, it is ordained that workers’ wages should be clearly agreed upon before a worker commences his or her work, and these wages must be paid promptly.

In the Qudsi Hadith, it is narrated that God says, “O my servants, I have made injustice forbidden on me and I made it forbidden for you among yourselves, so do not engage in oppression or injustice”

Prophet Muhammad, peace and blessings of God be upon him, said, “Beware of committing injustice because injustice turns into a punishment of darkness on the Day of Judgment” (Sahih Hadith)

It is also required by employers not to give workers tasks beyond their capacity. Employers are accountable for their workers and have to ensure that their workers are justly treated at all times.

It is the characteristic of a believer to fulfill promises and abide by agreements.  In the Quran, Allah describes the believers as: “Those who are faithfully true to their trusts (all the duties which Allah has ordained, honesty, moral responsibility and trusts) and to their covenants” (Quran 23:8)

عَنْ عَائِشَةَ ، أَنّ النَّبِيَّ صلى الله عليه وسلم قَالَ :”إِنَّ اللَّهَ يُحِبُّ إِذَا عَمِلَ أَحَدُكُمْ عَمَلا أَنْ يُتْقِنَهُ“.
The Prophet, peace and blessings of God be upon him, said:
“God likes, if one of you performs a piece of work, that he should do it well.”

This saying of the Prophet reminds us that a Muslim who is entrusted with a job should do it the best of manners.

Our role
-       Live by those Islamic ethics of compassion, justice, honesty. We must be mindful of them in every situation, including in our roles as employer or employee.
-       Be part of the political, economic, and social struggle to defend workers’ rights to fair living wages, healthcare, a safe work environment, the right to organize, the right to enjoy religious freedom, and the like.

---
Prepared by Hussam Ayloush, August 2010
Executive Director of the Council on American-Islamic Relations, Greater Los Angeles Area
Past Board Member of Interfaith Worker Justice (IWJ)
Posted by Hussam Ayloush at 10:01 AM No comments: