Who needs another crusade? Commenting on the "Palestinian child brides" fabricated story

Over the last few weeks, I received a steady stream of emails from friendly and not-so-friendly people forwarding to me a story about "Palestinians" and/or "Muslims" holding a recent mass wedding in Gaza in which 450 men were supposedly married to young girls, mostly under 8 or 9 years old.

The stories were written by "reliable" sources of truth and fairness such as blogs and sites with names like "The Last Crusade" (operated by a Paul L. Williams, Ph.D.; since he has a Ph.D., he must know it all), Israelforum.com, infidelsarecool.com, grouchyconservativepundits.com, and infidel bloggers alliance. 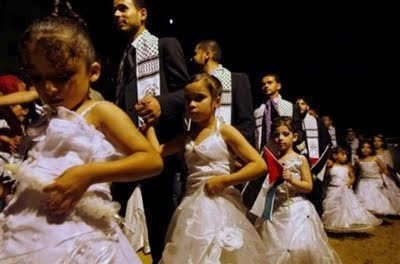 Almost all of the sites show a photo of very young girls walking alongside older grooms. Of course, the claim is that those little girls holding flowers are themselves the brides. Anyone who has the slightest knowledge of weddings in that part of the world knows that those girls are the flower girls who typically are the little sisters, nieces or cousins of the grooms.

Outraged about the hateful and false blog stories on this mass wedding, Tim Marshall, Sky News Foreign Affairs Editor, who covered that wedding, wrote an article on the Sky News blog. In his post, "Islamophobia. Ignorance Or Propaganda", Marshall wrote, "the party is for 450 grooms, the brides are elsewhere, some among the 5,000 or so guests. It's the way things are done here." "Dozens, and I mean dozens, of websites took the video of the event and wrote lurid stories about Hamas mass paedophilia with headlines about '450 child brides', and endless copy about how disgusting this was, how it showed how depraved Islam is, et al, ad infinitum. Site after site jumped on the story, linking from one totally wrong load of rubbish to the next," he added.

"...some people want to believe nonsense like this, as it re-inforces their prejudices," Marshall concluded.

I have to say that it was not very wise for the wedding organizers to set up the visual of the grooms walking to the stage with their young sisters and nieces. 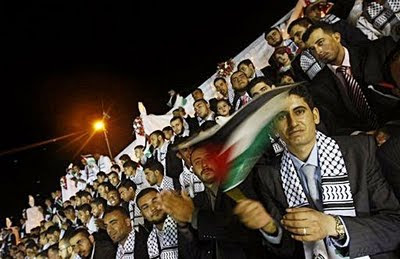 In this day and age, they should have known that there are enough sick-minded perverts or hateful bigots who will use such photos to demonize Palestinians and Muslims.

And it sure is happening. Now every bigot (and their uncle) who wishes to justify and promote his or her bigotry is writing about how vicious, inhumane, evil, and monstrous Muslims and Palestinians are. And their evidence for that is the photos of those "poor little brides."

At first, I did not believe that there was a need for me to respond to such Islamophobic propaganda. I was wrong. Many people continue to allow themselves to be gullible victims of such hatred.

It is obvious that the purpose of this concerted and manufactured distraction - the hateful "wedding story" - is to demonize and dehumanize Palestinians in order to justify and distract from Israel's brutal occupation, apartheid wall, humiliating checkpoints, illegal building of settlements, and inhumane siege on the Palestinian people.

Next time, do me a favor - when you receive an email forward from "The Last Crusade" or any of their hateful partners making a case for how demonic those heathen and infidel Muslims are, please reply to all recipients of that message explaining how wrong and ungodly it is to hate, defame, and spread lies.

How about we start a new "crusade" against bigotry?
Posted by Hussam Ayloush at 11:44 AM

Thank you for your response. I am glad you decided to respond to this. Many people are very ignorant to Muslims and Palestinians and can jump to the silliest conclusions. God bless

Thanks to the writer of the story for finding the truth. Unfortunately, too many in the media report what is told to them rather than learn the truth for themselves.

You show how a picture can be misconstrued.I will be watchful of this Last Crusade person.
Have you heard of Acharya?She usually have scholarly articles on various religions,except Islam.
When it comes to Islam, she puts up youtube videos of 700 Club, Glen Beck, Fox News, Shoebat Walid,Fox News items that don't show Islam in good light. I pointed out her scholarly standards are suffering when she mentions Islam.She came back at me and saying,"Who are you?I been studying Islam for twenty years and found nothing good in it."
That is worrisome.So, after a few comments between each other. I gave up and left. I thought you might need to be aware of her.

Thanks for exposing this viral campaign to discredit Islam and besmirch Palestinians. I am grateful to God that you are around to set the record straight, esp. since many harbor weird prejudices about Muslims.